Hanging out in the MERL 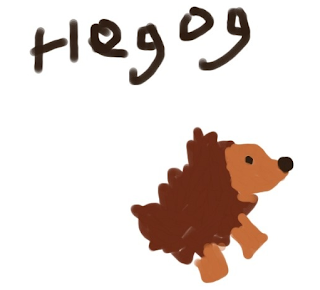 At Half-term, June 2012, we are just hanging around in the Museum of English Rural Life with iPads, Berkshire Farmer Books and the iMuse trolley. Visitors are trying bits of the trail, with labels fastened with soft tape to objects, QR codes and (a selected few) Widgit symbols, videos showing stuff working, extracts of the story being read, photos from the archives.

Children are borrowing the iPads to draw and take photos (and transform them optically). We've tweeted some as an easy way to save them. Interesting that we got a drawing of a 'Tractor at Night' - good to see an understanding of modern farming techniques in an 8 year old, though the 'Farmer Pirates' treasure map was an interesting mix of themes!

A family watched the video from the Amners Farm Lambing Sunday - though some turned away during the actual birth, one raised the subject of stillbirth which showed an encouraging understanding of the sometimes grim reality.

We also showed the Olympics Trail - the animations [story lines from two Reading schools as part of the Cultural Olympiad] went down very well, and did lead to discussion on javelin throwing and Greek boxing. Young children knew more about the street dancing moves than iMuse. Also brief iMuse visit to the Ure Museum of Greek Archaeology, Reading, revealed that the animator has now published the full thing which is great news. See Ure View Animating Ancient Greece on Youtube

MERL has a very relaxed area with toys, a rug to play on and comfortable seats. It's a natural place to sit showing stuff on mobiles like the iPads with people dipping in to look at stuff or draw or talk. Not all museums have this though. iMuse will have to think about what/whether it could do in a more formal place.

Village Fete coming up 9 June. iMuse will report it here.